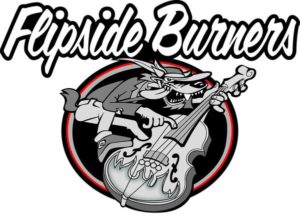 The Flipside Burners are a true rockabilly band from San Diego, California. Rockabilly is an early 50’s style of rock and roll music. A blend of sounds of western music styles like country to rhythm and blues or a blend of bluegrass with rock and roll. They’re influences are people like Elvis Presley, Carl Perkins, Johnny Cash, Eddie Cockran and Jerry Lee Lewis.

The Burners are currently playing shows all over Southern California. In between shows they are in the recording studio recording their originals song for their first CD.

The Flipside Burners are guaranteed to set the place on fire and get the dance floor jumpin’ with some smokin’ Red Hot Rockabilly tunes.
Flipside Burners members have played at venues and stages across the nation and with many popular national recording artists.
The ’Burners’ play a blazing variety of Rockabilly, Swing, Blues and Vintage Rock & Roll originals and covers from Johnny Cash to the Stray Cats and all points in between. 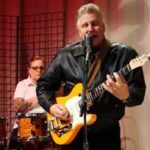 Mark Fahl-Guitar/Lead Vocals
Mark started playing guitar in the 60’s and has played in many popular bands and venues in San Diego including The HARD ROCK CAFE, PECHANGA, PALA, PAUMA, SYCUAN AND VEIJAS CASINOS. He has backed NANCY SINATRA, SONNY TURNER (THE PLATTERS (“Only You”), DIAMOUND DAVE (“Little Darling”) and country star LYNN ANDERSON.

Eriberto (Eddie) Montoya-Dog House Bass
Eriberto ( Eddie) Montoya slaps that big dog house bass, better known as Marilyn. Eddie has played with many rockabilly bands in and around San Diego. He has been a musician since he was just a kid. He started on the accordion at the age of five playing in his family’s mariachi band. He has played many instruments. Started playing the violin at the age of 11. His roots are in mariachi music but has since spread out into several other genres including rockabilly and blue grass. Eddie is a true show man of the Flipside Burners. 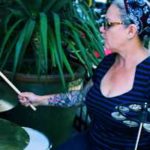 Becky Russell-Drums/Back-up Vocals
“Girl Power Becky” has toured the US playing drums with the legendary, UK Chart Topping Psychobilly Band ‘The GUANA BATZ, who’s single ‘I’m on Fire’ is one of the best selling Psychobilly singles ever and album, “Held Down to Vinyl…At Last!”, topped the UK Independent Charts. She latter continued to tour with ‘Guana Batz’ offshoot, ‘BONNEVILLE 7’. Becky has played at top venues around the county with many popular San Diego bands including local favorite Rockabilly bands ‘The Stilettos’ and ‘Big Rig Deluxe’ and with popular local favorites, ‘The Robin Henkel Band’, ‘Billy Watson’, ‘The Lance Diecmann Band’ and ‘The Stoney B Blues Band’.

Music Scene
Rockabilly singer, songwriter and guitarist Sonny Burgess — who became one of Sun Records’ stars with his raucous and unbridled whoops and howls, accompanied by his furious guitar — died at age 88, on [read More…]

Music Scene
“Los Angeles might be the corporate music capital of the world, but it’s also the home to America’s longest-running underground music scene, a scene that has survived underground 50 years thanks to die hard musicians, [read More…]

The Roots of Rockabilly ~ Artists and Songs

Music Scene
Rockabilly music burst onto the national scene in the mid-fifties and quickly filled the pop music void that existed in the early 1950s. This new sound seemed to come out of nowhere and, at first, didn’t [read More…]